I was lucky enough to get 162 MHz marine tracking signals from ships in the Great Australian Bight, out to 1998 Km. Just short of 2000 km.
So this was quite impressive. These paths went to a low pressure weather trough running south from Esperance, many of the spots were SSE of Esperance maybe 200 or 300 km.

17th/18th June 2014 - Big tropo opening in winter which lasted continuously for 2 nights and a day. Covering SE Australia west of the dividing range.

25th Jan 2014 morning - Another opening to the west today. Reached as far as Derek VK6DZ on 2m WSPR at 2664 km, best sig of -17dB and faded away about 30 mins after sunrise. Weak VK6REP beacon 2313 km on Spect Lab. Numerous other big sigs from VK5 Adelaide direction. Also was open to Mt Gambier but no stations available. 10 ship signals into the Bight, scattered up to 1100 km. 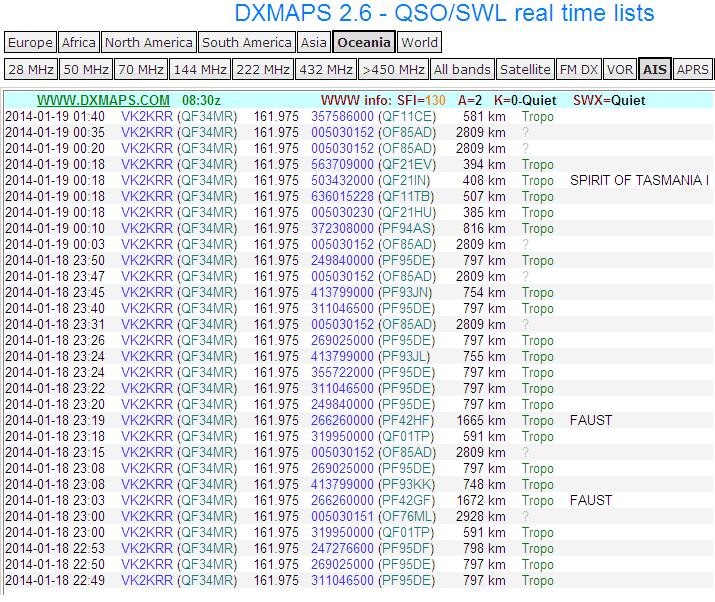 31st Dec 2013 morning - Big big signals around western half of VK3 and VK5, but peaking in VK5 in the SE area. Had a very narrow lot of marine tracking signals heading out from Kangaroo Island to Mt Gambier area out across the Bight, but low pressure trough blocking anything directly south of Esperance, nothing close to coast and could not hear beacons. Furthest marine tracking at 2116 km. As best sigs were south side of Adelaide, I worked Jeff VK5GF with 5/9 signals on all bands 2, 70, 23 cm. Great work from Jeff. In comparison, only a little further north, I could barely hear Brian VK5BC/p Corny Pt on 2m. Many 5/9+60+ signals noted from many repeaters, particularly in WSW direction. Nothing was heard from Derek VK6DZ on 2m WSPR this morning. Interesting times. 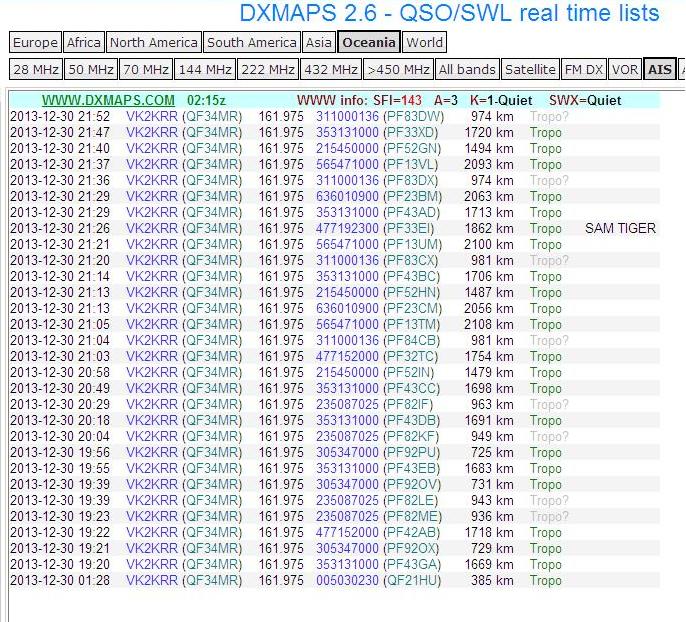 28/29th Dec 2013 evening/monring - A great opening with a well defined beginning. Very hot day on Sat 28th, temps up to 43 degC with RH as low as 8%. Sometime around 11pm the weather change hit with a strong SW wind to about 39 kmh and turned cold rather quickly, overnight temp got as low as 9.5 degC. It was only about 30 mins after this weather change hit that I found I could hear VK6REP 2m beacon at 2313 km and had ever increasing signals from VK3 and VK5 repeaters and beacons.

At 12.38am I got first signal from Derek VK6DZ at Elleker WA on 2m WSPR @ 2664 km. Dereks signal peaked at 02.10am at a -9dB and at that point I was getting very excited about the morning prospects, but it floated from there to -29dB from then on and the last signal was heard from Derek at 06.36am only about 30 mins after sunrise.

The VK6REP 2m beacon peaked up about 5/3 signal about 3am. I could also at times see VK6RST 2m and 70cm beacons, but they were not strong. I tried for repeaters over in VK6 but heard none.

There was not many VK5 stations around this morning which was a shame.

Below is an image of VK6REP on Spect Lab and WSPRX display, also see VK6DZ decodes on WSPR screen. 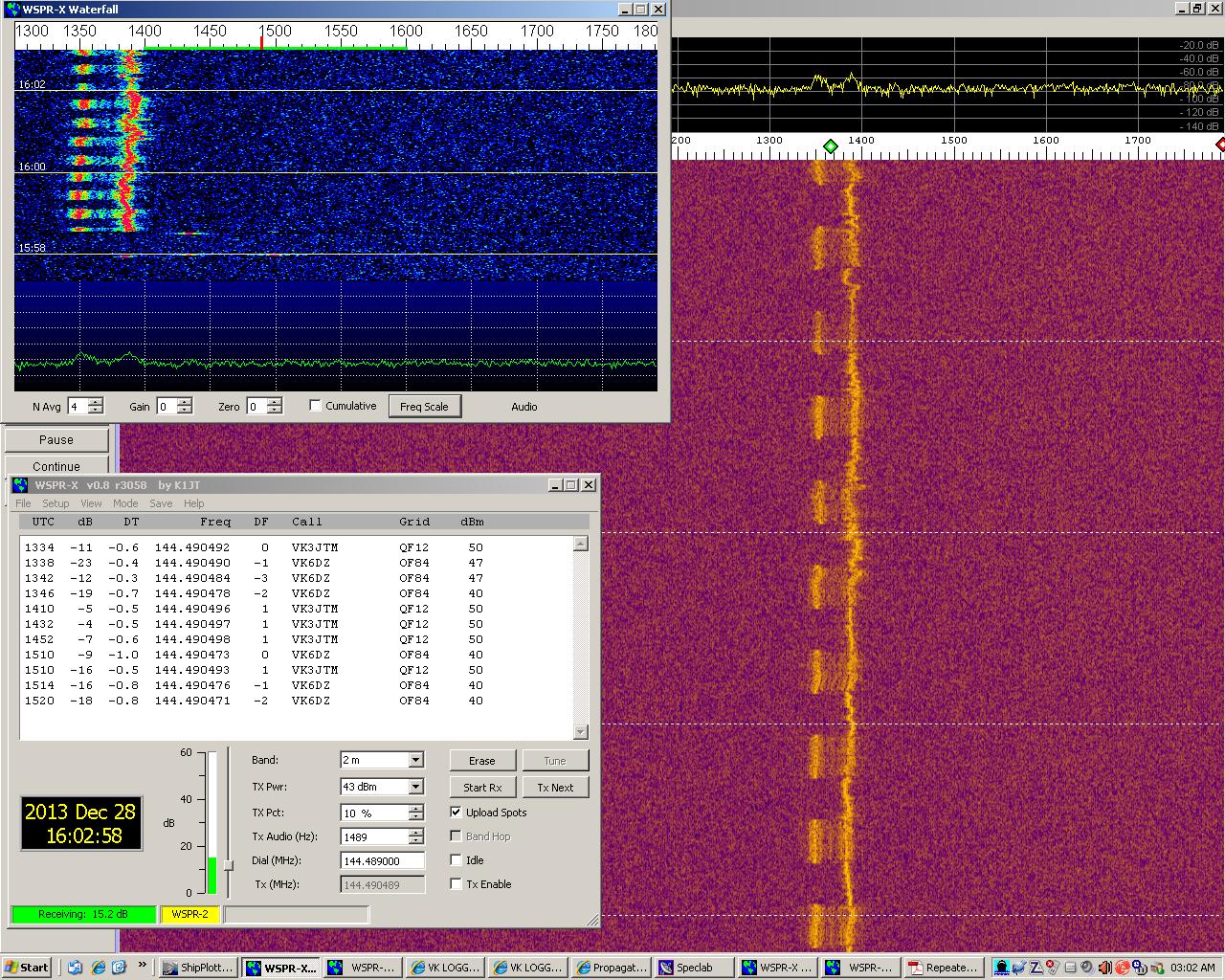 14/15th Dec 2013 mornings - Paths to VK6DZ and VK6LD/p Albany on 2m WSPR. On the morning of 14th I could hear the VK6REP beacon to 5/1, this was not present on 15th where a low trough had built up this end. I could eventually hear VK6DZ. Interestingly, the signals at Adelaide were not that good, no repeaters at all from VK5 on 15th. 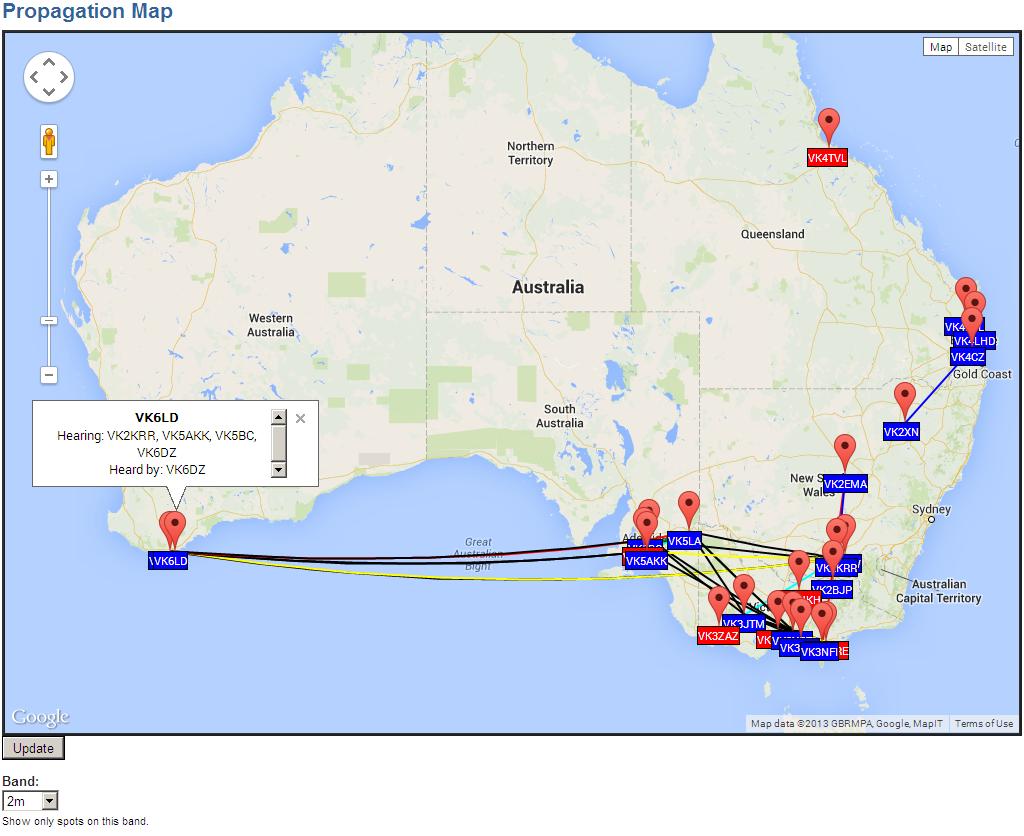 3rd Nov 2013 morning - Again equalled Australian record for 2m digital, path to VK6DZ at 2664 km from 4am to 9am. Also making it to Derek were VK5BC and VK5AKK. We all also could hear Esperance beacon 144.568 MHz. It was 5/1 here. Albany beacons were not heard.
I could hear a ship near Ceduna and some others closer to Adelaide and Whyalla.
Worked VK5KLV @ 910 km and VK5DMC @ 866 km on FM simplex.
Port Lincoln and most other 2m repeaters heard around Adelaide area.
70cm did not work well, although a good contact with VK5PJ was had at 5/9 signal.

31st Oct 2013 morning - Equalled the Australian record again for 2m digitial modes, hearing a couple of 2m WSPR sigs from Derek VK6DZ at Elleker WA @ 2664 km. Good stuff Derek and thank you for the signals. This was the first big opening with the 4 x 17 ele yagis w/40ft booms. Derek was very weak at -31dB and later a -29dB. I think it was very lucky we made it at all as the weather condx were not favourable at Dereks end with a low pressure trough beginning to extend down from the north toward Dereks QTH.

I was also able to hear the Esperance beacon quite easily on 144.568 MHz. It was up to 5/1. Ive marked the VK6REP beacon location on the map below and this also shows the WSPR path to VK6DZ. VK6REP is 2313 km. Attaching a WSPR waterfall graph of the Esperance beacon transmission below the map. 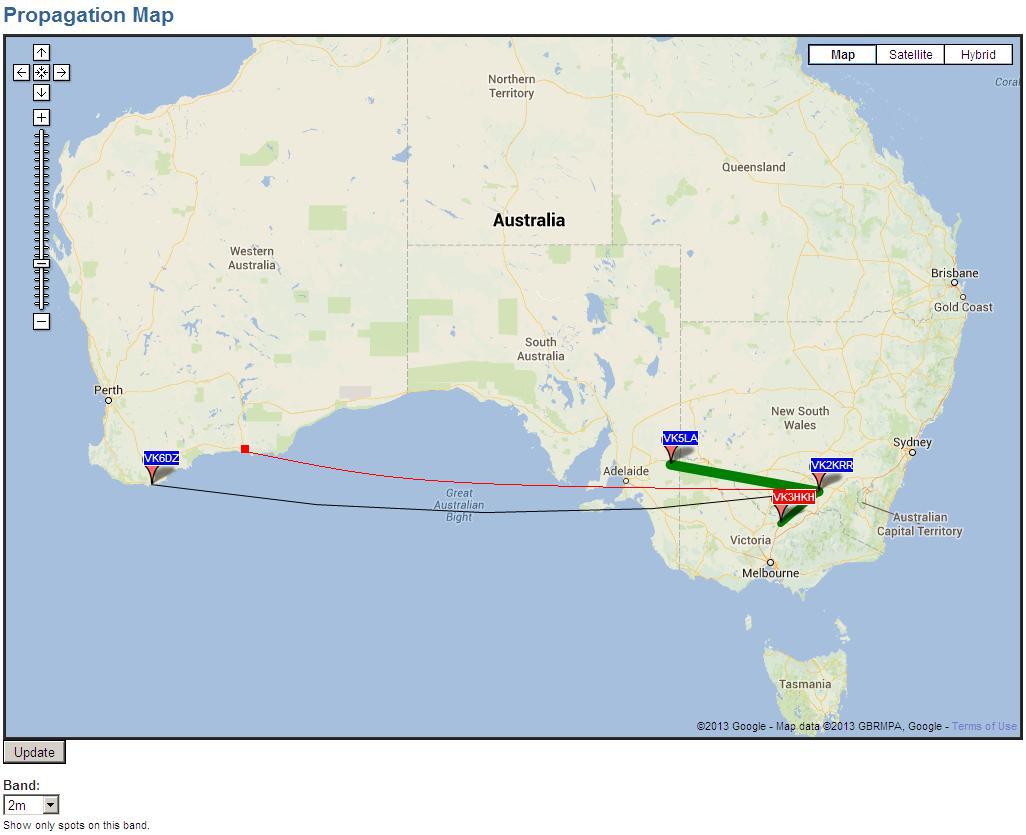 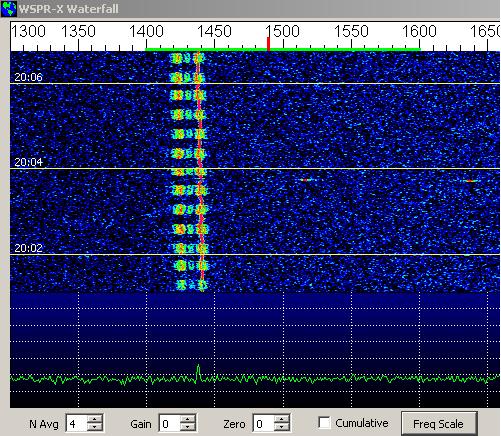 1st Jan 2013 morning - yet again for the 4th morning in a row, I was able to get a 2m WSPR path to and from Derek VK6DZ at Elleker WA. @ 2664 km. No other indicators were showing, could not even see Adelaide 2m beacon on Spect Lab. This morning I was also able to work Bob VK6BE at Albany only 5/1 signal.

31st Dec 2012 morning - This morning I got a 2m WSPR path to Derek again! 3rd morning in a row! quite amazing! There were no indicators to say this was possible, the Adelaide 2m beacon was not even on Spect Lab. But there was Dereks signal on the WSPR screen 2664 km west.

29th & 30th December 2012 mornings - Made it to Derek VK6DZ on 2m WSPR both mornings @ 2664 km. Heard VK6REP 2m beacon at Esperance both mornings, on Sat morning was up to 5/4. Got 3 vessels heard at Esperance on marine tracking. Numerous vessels around Adelaide to Port Lincoln areas.

9th Sept 2012 early morning - First of all I had a number of ships around the Adelaide area and across to Port Lincoln. I think eventually in this area I had about 7 vessels. This is in range of about 1025 Km to 800 Km.

A bit after 2am, I looked on the marine traffic internet map and could see a number of vessels being spotted near Esperance and Albany, WA, so I adjusted the beam heading to see what I could get. Not really expecting anything, suddenly a new ship alert rang out and it was not being displayed on the map due to the current view. I clicked over the list of ships on the Shipplotter program and it said new ship was Zheng Kai ..... 1419 nautical miles... (2627 Km!). No way! I thought... and so I zoomed out the map and there it was, just south of Albany, Western Australia. I was pretty excited to see that, and thinking to myself.. is it going to go any further ??? But no sadly it didn't. But still, 2627 Km is the furthest Ive ever gotten with the marine tracking signals, so I am very pleased with that, and I dont think conditions were all that good as I only heard about 8 signals from Zheng Kai in total.

Then I began getting a few signals from the middle of the Bight, around the 1500 Km zone. These persisted and were some of the last signals I heard.

Of which, the last signal received was from Manila Express, just before 9am. This was around 1300 Km I think. Just SW of Port Lincoln.

27th May 2012 - In the evening condx picked up toward Adelaide area, between about 11pm and midnight I was able to decode 4 ships in the water to the west of Adelaide to about 845 Km.

31st Oct to 2nd Nov 2011 - An unusually stable high pressure cell in the Bight, with low troughs well out on the east and west sides. I had reception of Esperance beacon 2m @2313 Km on each day, Monday Tues Wed, sometimes audible, mostly just on Spec Lab. Good signals into VK5 on 2m, did not have 70cm running. Phil VK5AKK got AIS reception to west of Perth.

25th June 2011 - A quick plug in of the FM vertical 2m yagis produced great results tonight. Was able to make it into the Broken Hill repeater 147.000 @ 638 Km. This is a very rare path and the repeater made it up to 5/9+10dB and I spoke to Peter VK2VKN and could also hear him on reverse. Great stuff!

3rd March 2011 - High from 1st March receeded slightly then came back. Signals from VK5 and also VK6. Copy on VK6DZ Elleker numerous times on WSPR from about 5am till 10.30am. Still continuing on the 4th March.

1st March 2011 - Good opening to VK5 all repeaters coming in so far except Port Lincoln.

12/13th Feb 2011 - Very interesting tropo event which started in the evening saturday 12th Feb. Switched on 2m and Adelaide beacon was 5/5 at an early 8 pm. I asked VK6DZ to come onto WSPR and I got him straight away -17dB. Completed JT65b contact with VK6DZ to make new WIA digital mode record for 2m band. 2662 Km.

I was also hearing weak signals from VK6REP and VK6RST beacons on 2m. On the sunday morning, Esperance beacon was just audible and VK6FN Max in Manjimup was working the Port Pirie rptr VK5RMN on 146.700 MHz. Was great to hear Max making the trip across the Bight path especially since he is only running 60W and 1/4 wave vertical.

I was also receiving the Esperance beacon VK6REP 144.468 MHz. As per usual, no operators keen on AR in VK6 area. Here is a capture of the beacon. nothing heard from Albany. 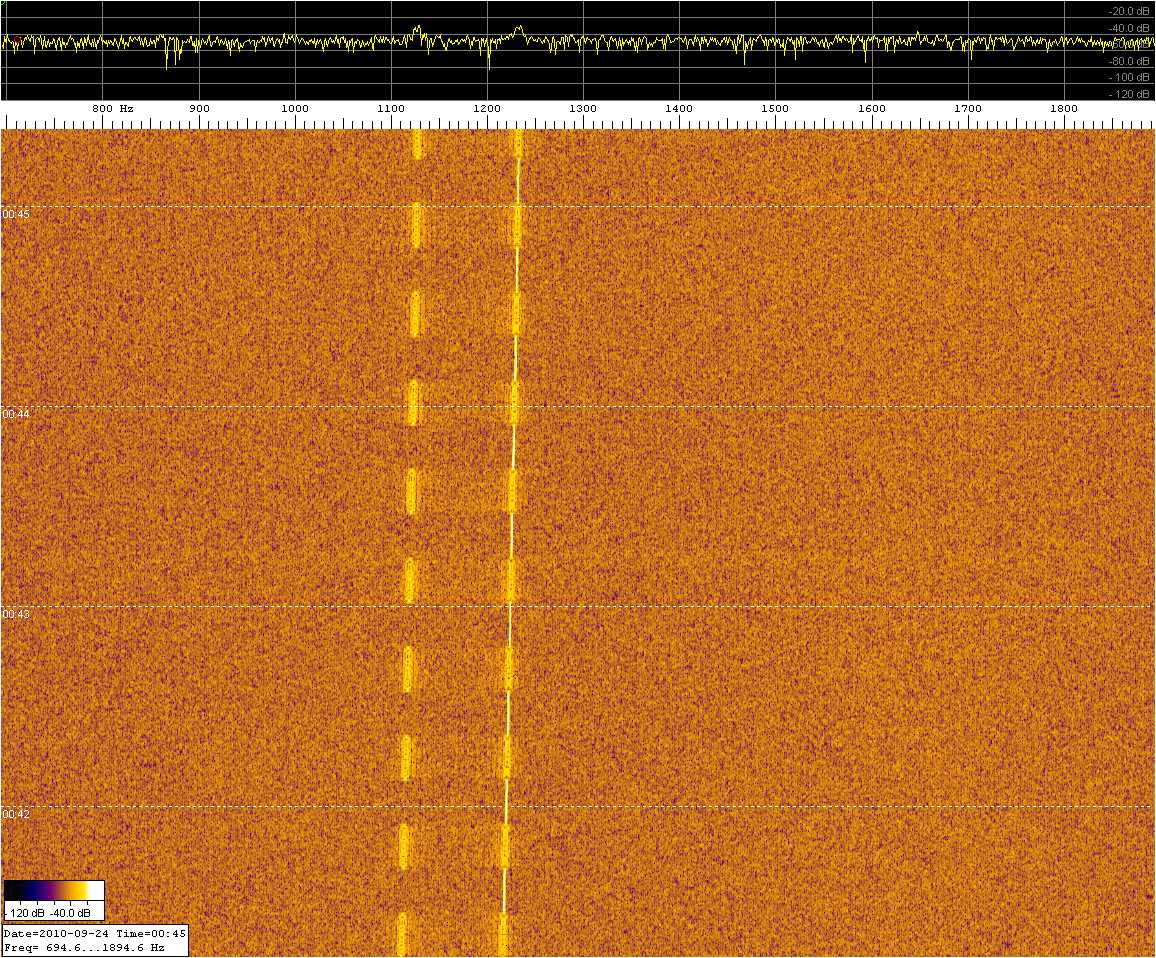 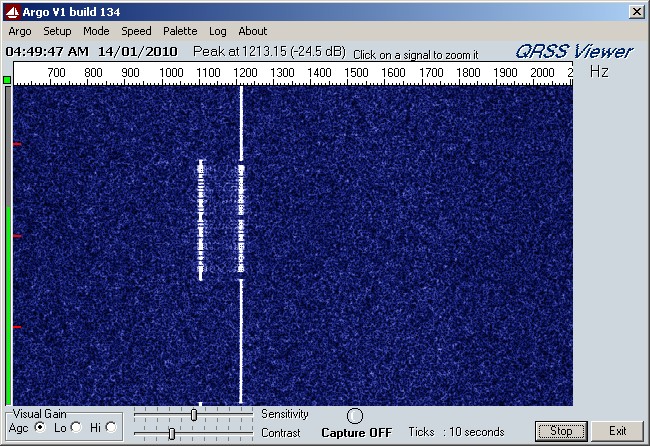 The beacon was only copied via Spectrum Lab & the repeater was only very weakly opening squelch.
Meanwhile in VK5, stations that were a bit closer were working stations via the repeater. Never quite got strong enough here. Maybe next time.

~INFORMATION ON THIS SITE MAY ONLY BE REPRODUCED WITH PERMISSION, LEIGH RAINBIRD VK2KRR~
Copyright ©Leigh Rainbird