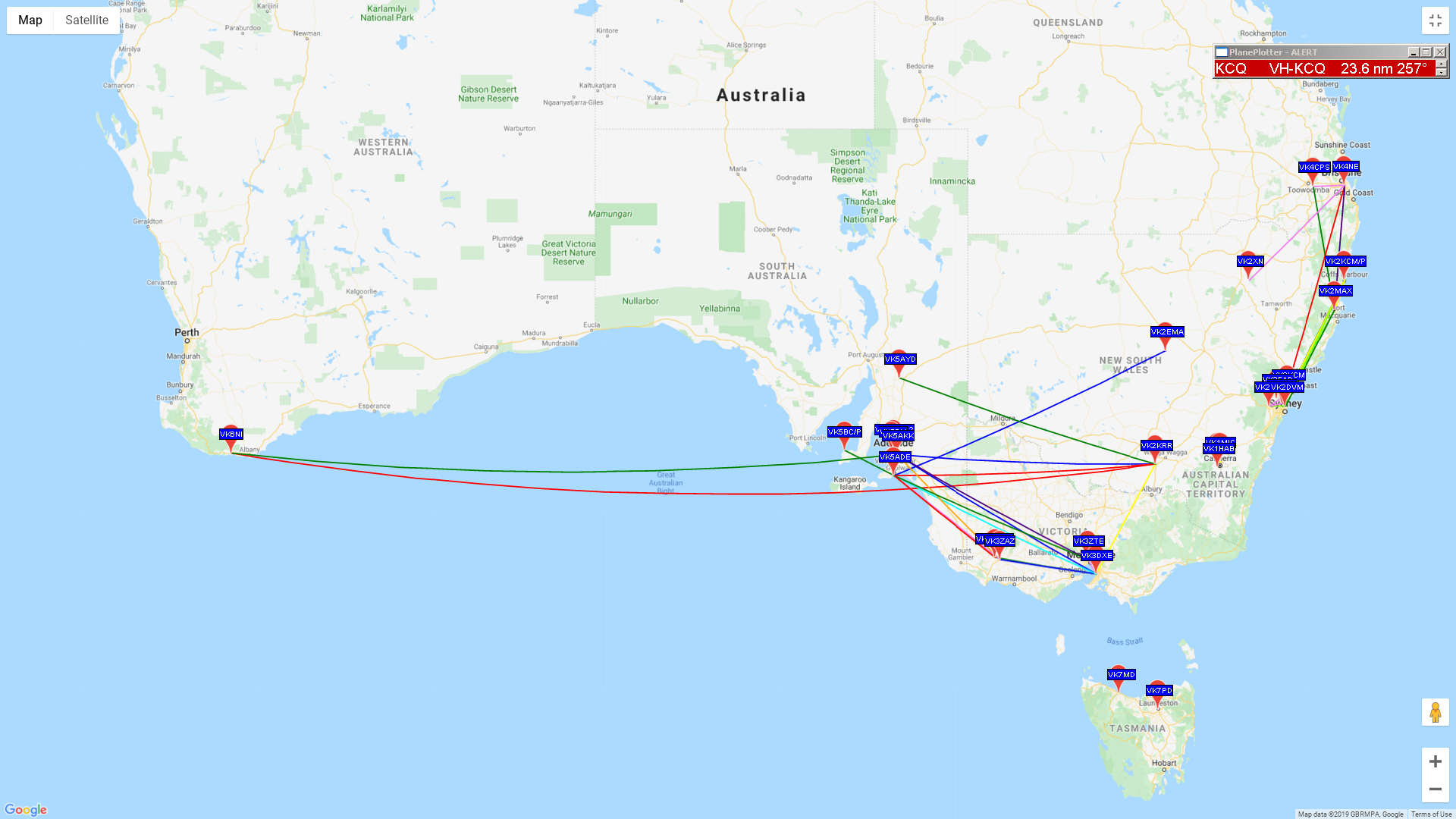 I wasn't even expecting this event to happen. I was alerted to a possible tropo opening by Hayden VK7HH earlier in the week, but I told Hayden, I highly doubt it. At the time the Hepburn charts didn't fit the picture in my view as the direction was wrong. But even up to the event, the Hepburn charts shows the path not reaching my location, but thats not unusual to see, in many occasions the charts are not always correct and I usually look at weather maps and other weather data to assist in working out the chances of openings. Below is Hepburn chart for 1800z Sunday morning, which is 1 hour after the last signal from VK6NI, but you can see the cut off point, which is caused by a low pressure trough moving through. 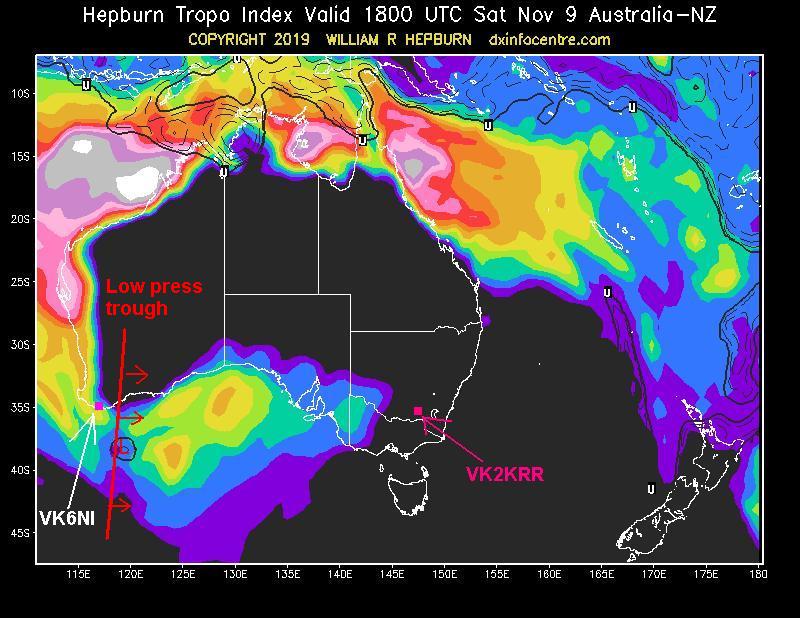 This was quite a classic example of why, sometimes you dont have long to get in on long paths across the Bight. Earlier in the evening the Low Pressure Trough, that can cause the cut off of these paths was situated nicely west of the SW coast line. If it sits out here it cant block signals to the east, but if it starts moving east then anyone to the west of the trough wont get signals through. Below is the MSLP map showing the low pressure trough west of the coast line at 12 UTC. Its only just off the coast, but thats enough. Notice also that the low pressure trough on my side of the path is east of me and is moving further east. If it were to my west, it would be no good. Often in the middle of summer, there can be a great high pressure cell in the Bight, and low pressure trough to the west of the VK6 coast, but during the night a low pressure trough often forms out of no where just on the west side of the Great Dividing Range, basically right over my QTH, and this (usually) destroys propagation here if one appears. 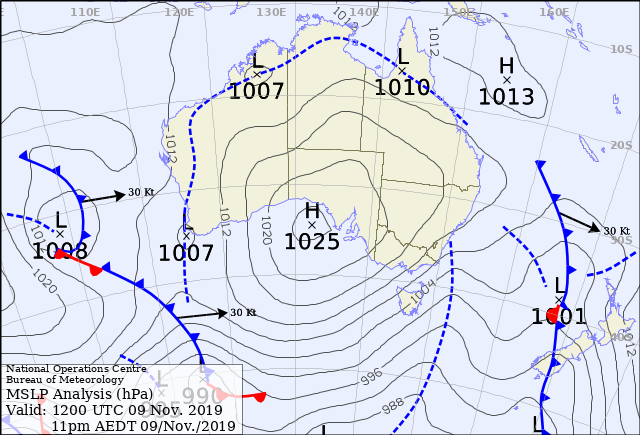 Below again is another map taken at 1800 UTC, same time as the Hepburn chart above. You can see the low pressure an trough line, there is also a cold front sweeping, pushing in behind it. This one shows cloud too which is handy. 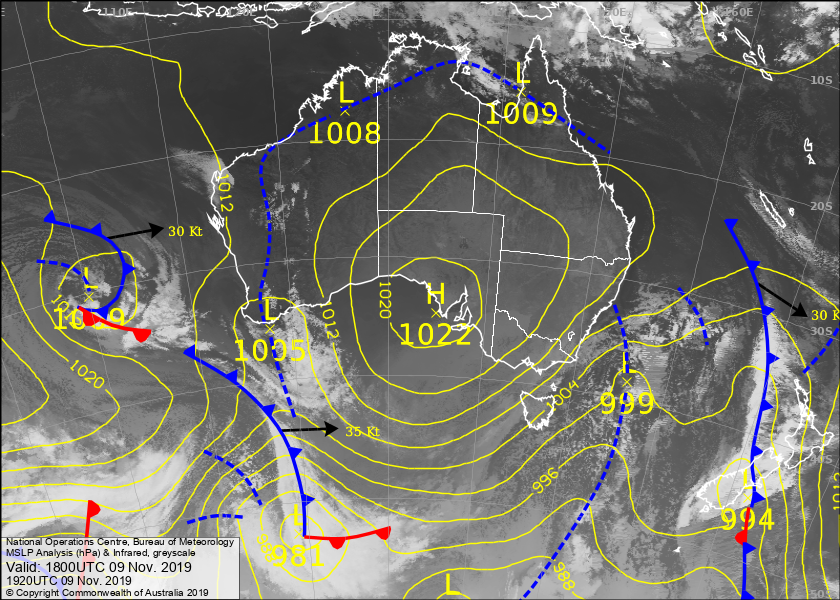 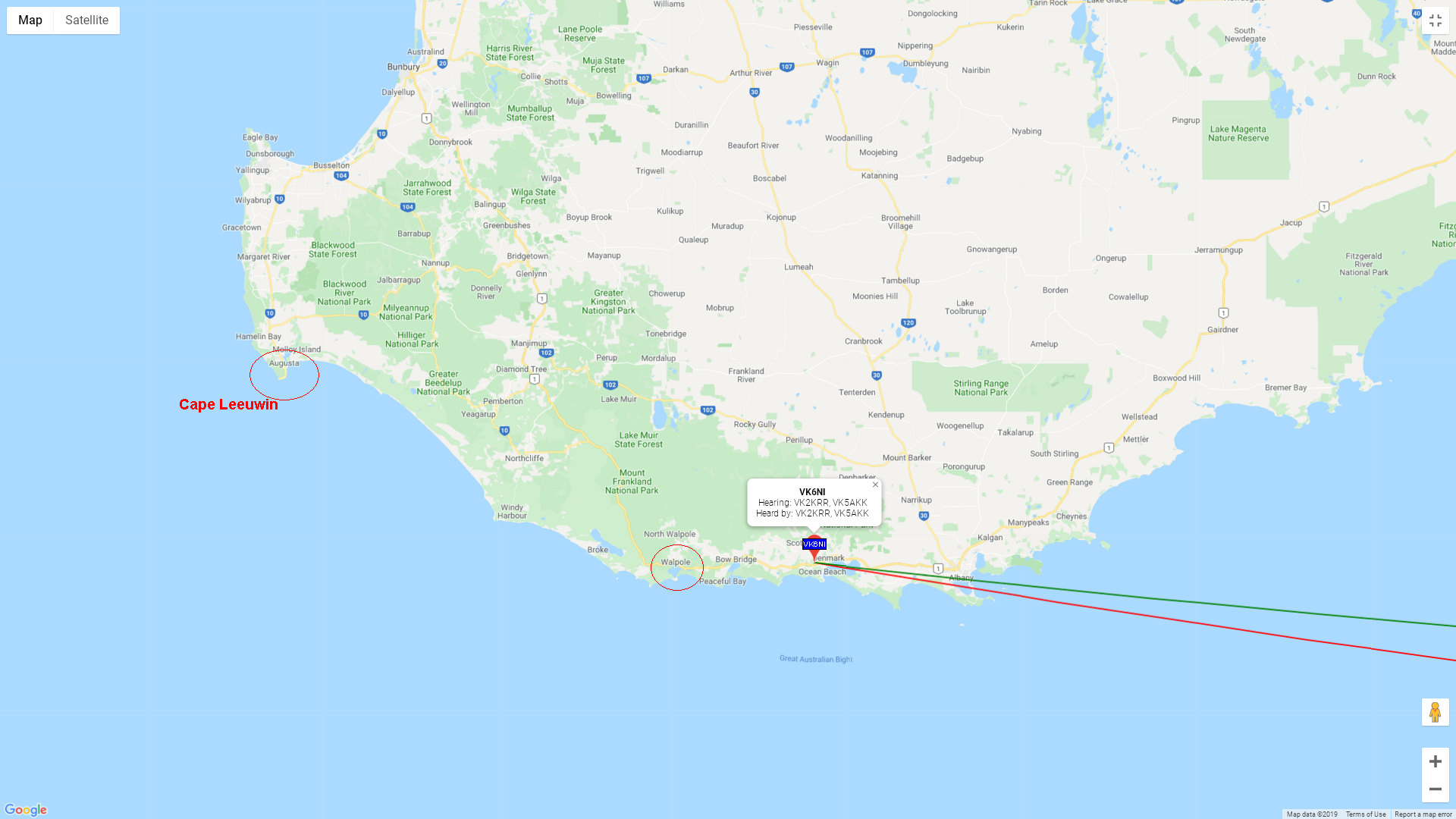 Below is a series of graphs initially for Cape Leeuwin, where I could get some data of the low pressure trough progressing east through the area around 9 PM local time. The 9 PM time is marked on the graphs. 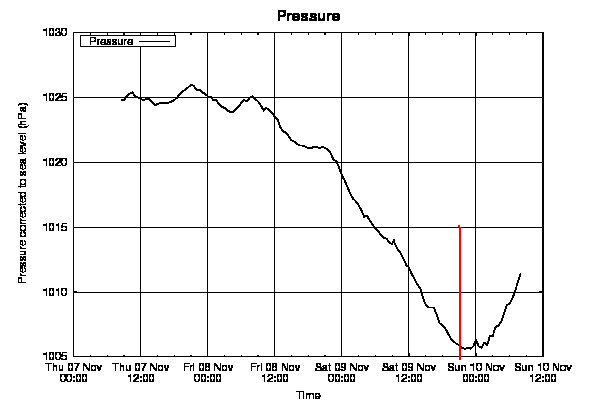 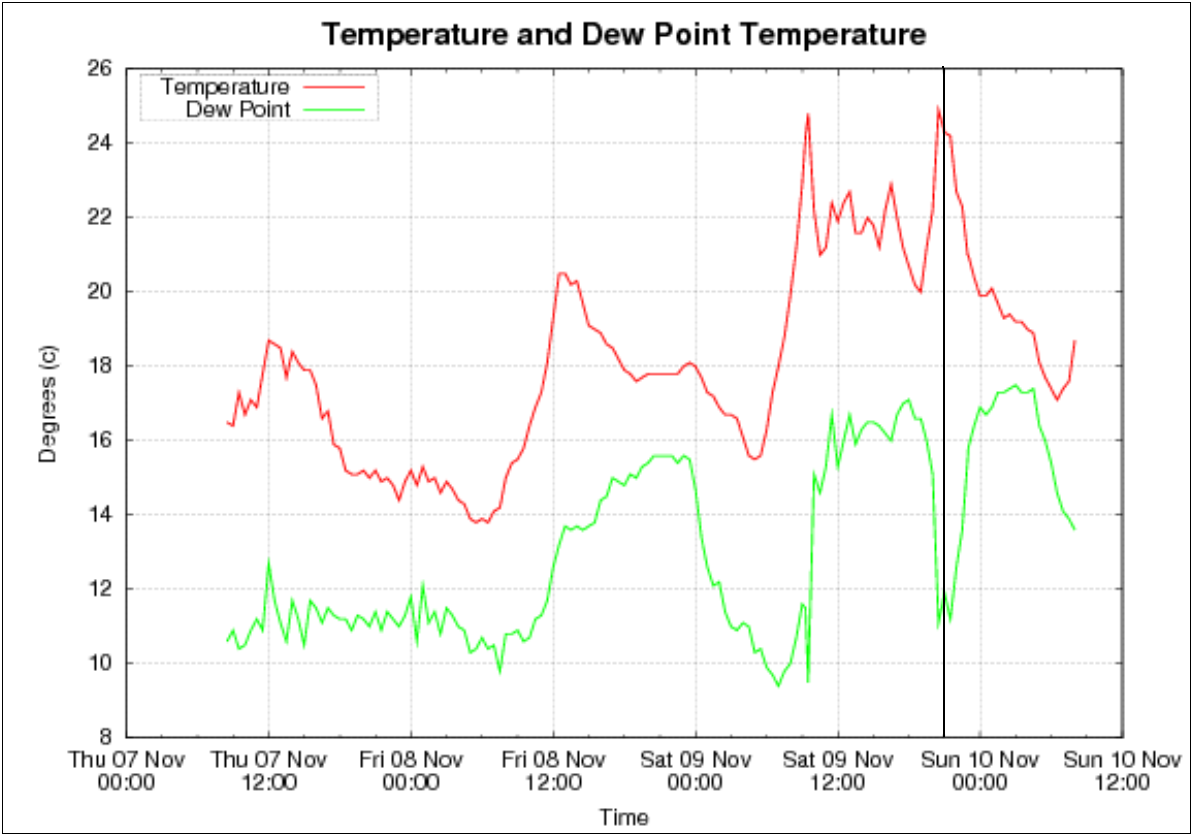 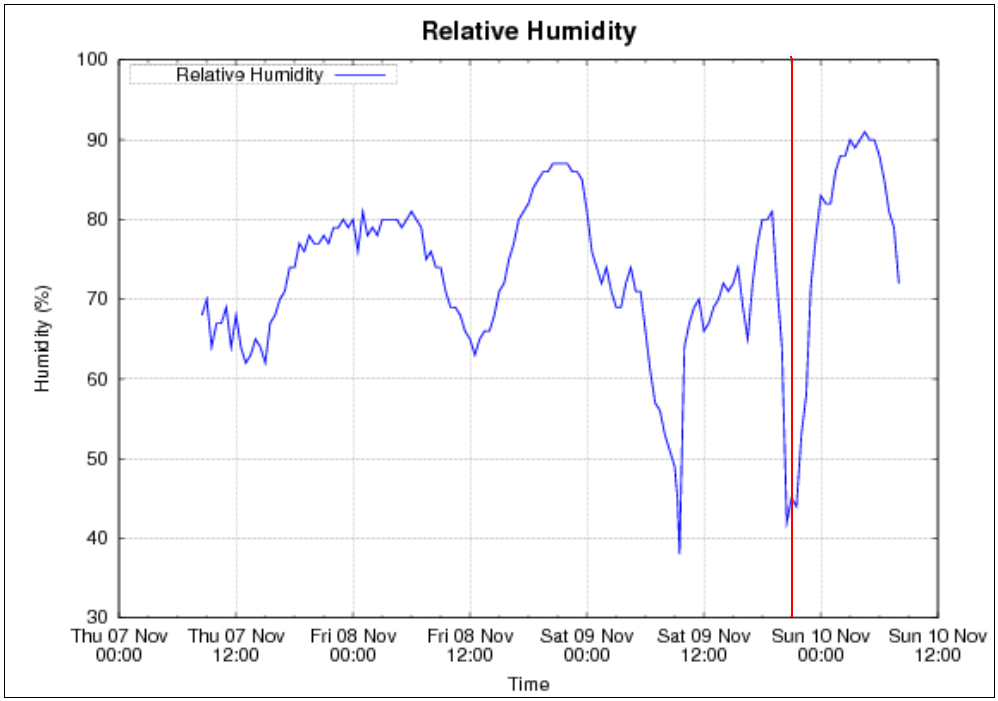 Next is a series of graphs from Walpole, where the low pressure trough appeared to move through around midnight local time. Which would put it around 3am eastern time for me which is around the time the last signal was decoded. 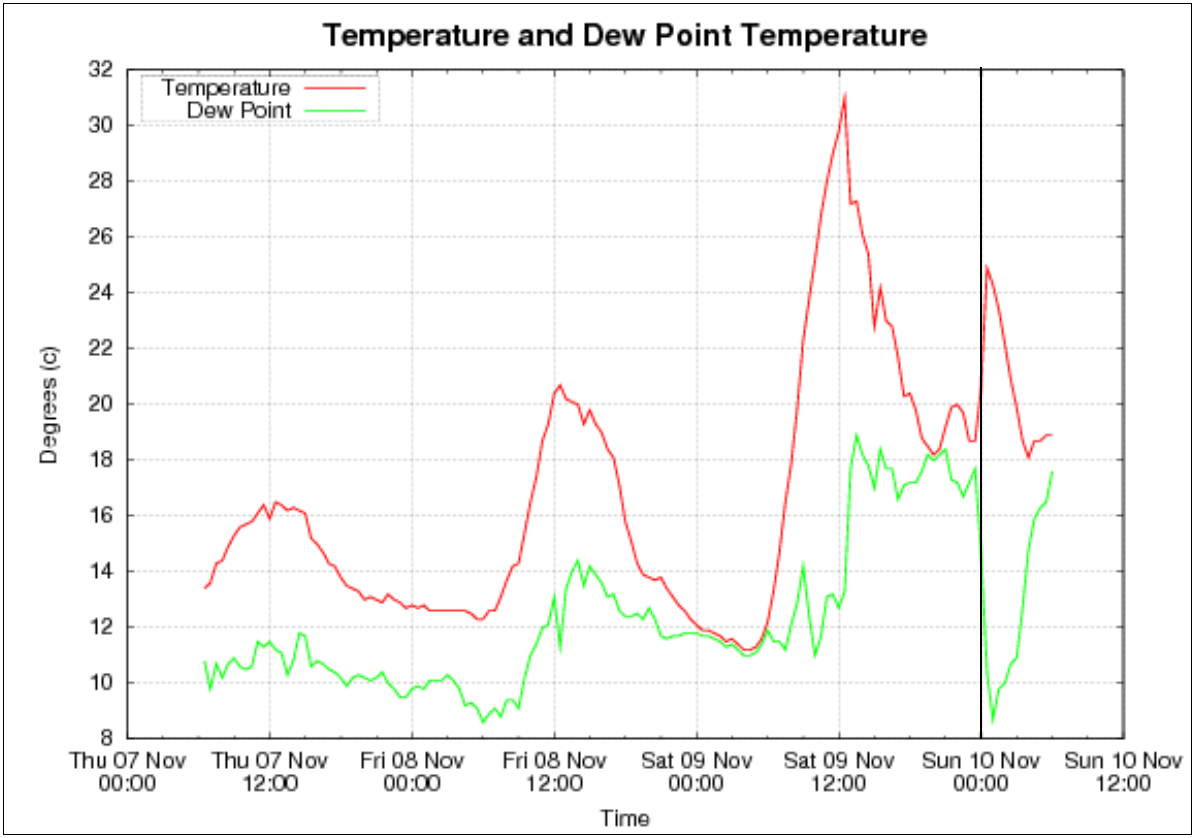 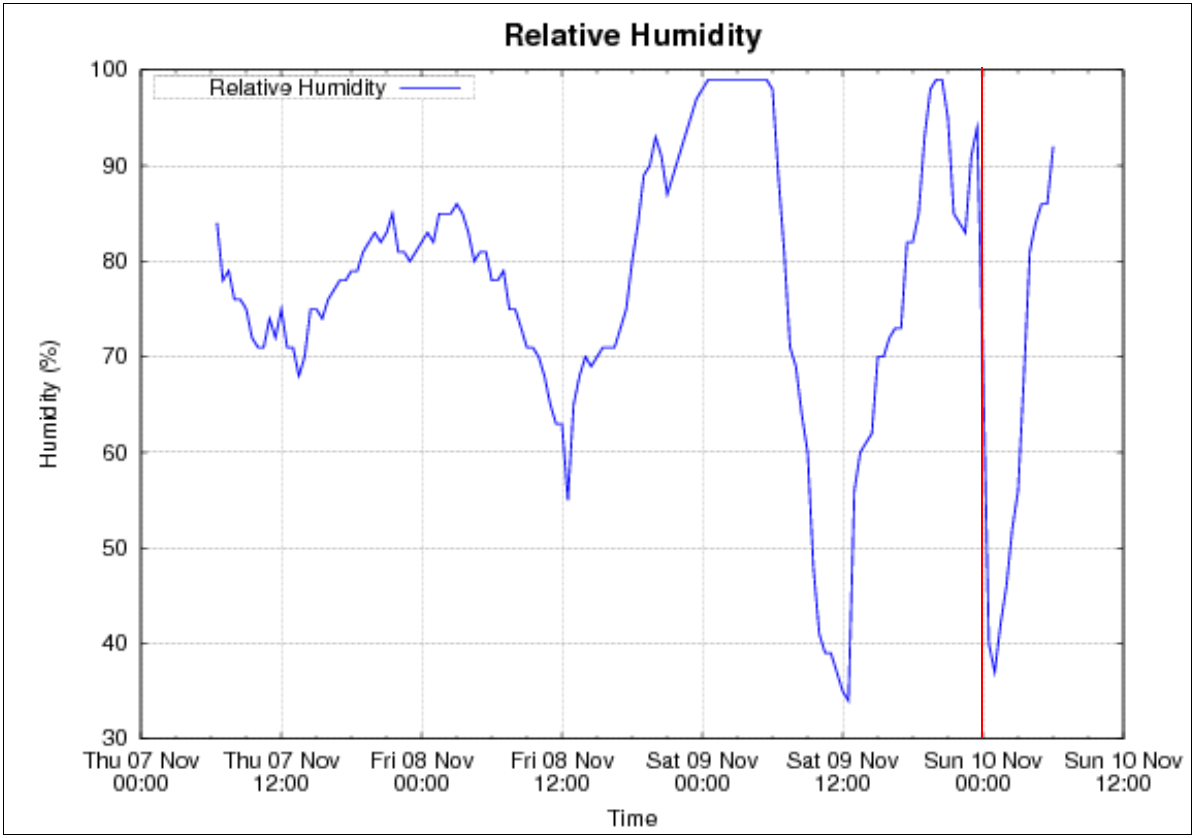 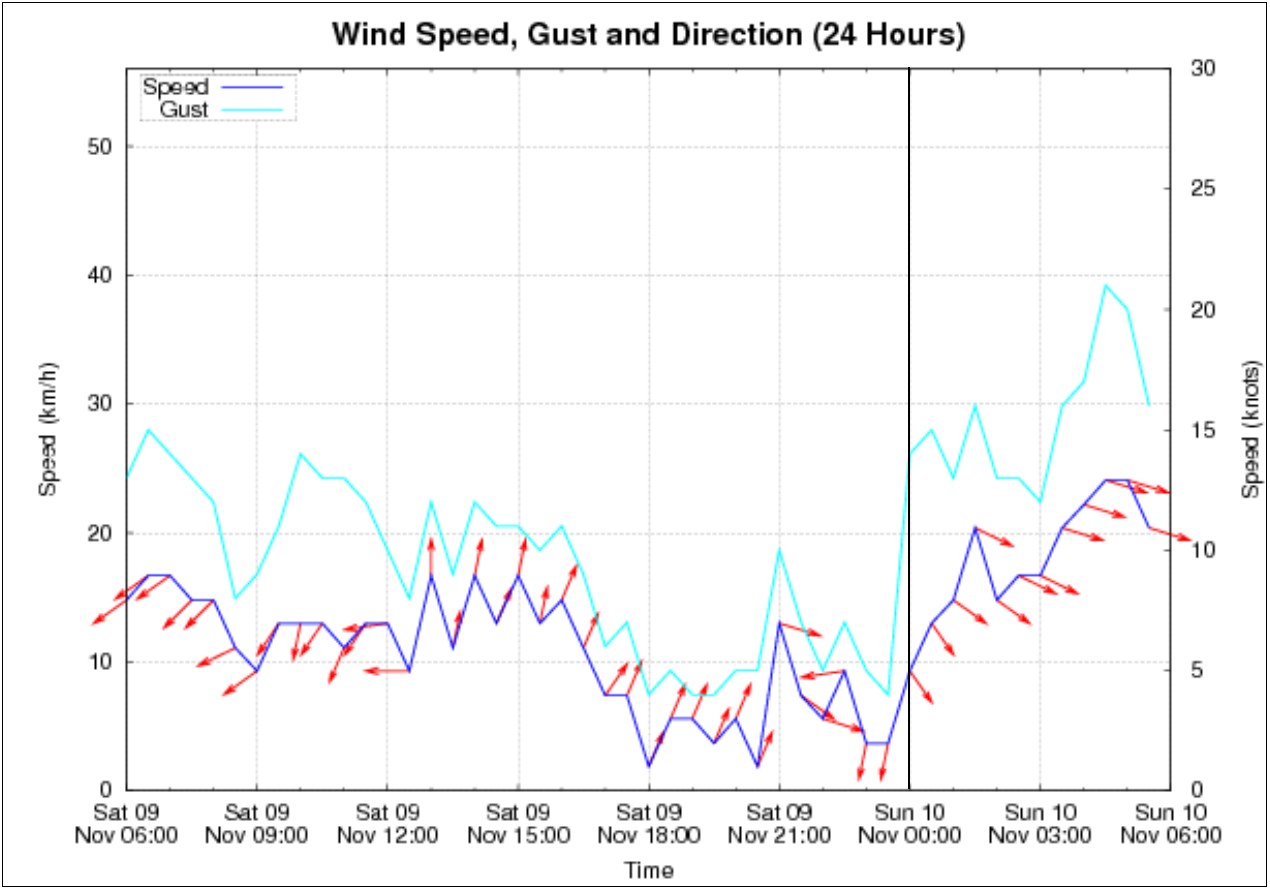 Below is all the 144 MHz WSPR data collected during the night generated from VK6NI. Note that I dont think VK5AKK lost the path after 1308 UTC, I think he shut down for the night. I was not TXing till about 1330 UTC. 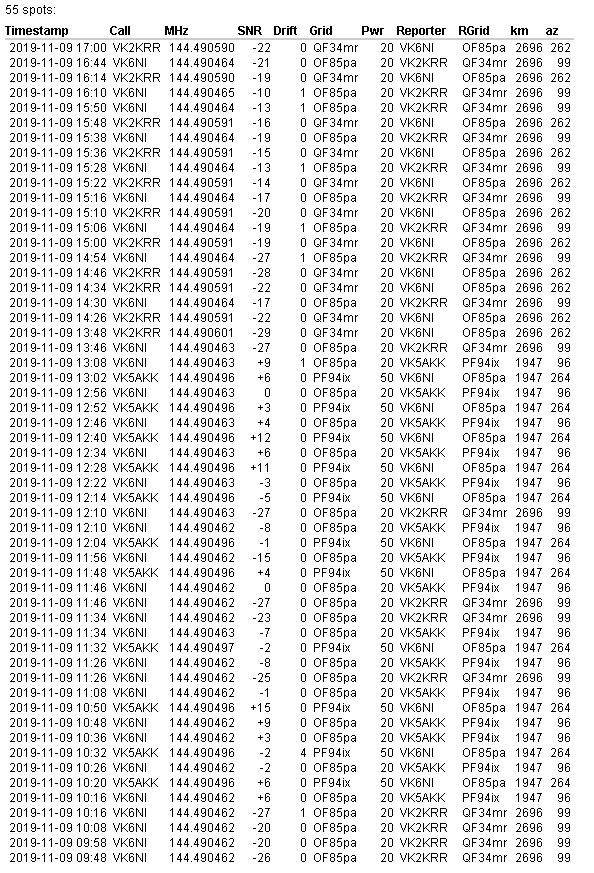 My station at the time consisted of 4 x 13 element yagis on 8m long booms around 70 feet in the air. No pre-amp. IC910 radio GPS locked. Not sure what VK6NI was using.

I was monitoring other indicators such as AIS 162 MHz and ADSB 1090 MHz and saw no enhanced signals. No signal was heard from Mt Barker 2m or 70cm beacons in VK6. No FM radio heard from Albany but I did briefly hear HIT FM Esperance on 102.3 MHz but was struggling with other TX MIXX FM Adelaide and 3BA Ballarat on same frequency. Adelaide 2m beacon was heard by only 5/1 signal. FM stations around Adelaide hills were good such as ABC Classic Adelaide on 103.9 MHz, 5/4 with full RDS decoding. Also stations such as VK5GF and VK5AKK on 2m WSPR were very strong.

Hope you enjoyed the data presented for this tropo opening.