One of the best ducts ever formed in the morning of Monday 2nd January, New Years Holiday in Australia. Two new 144 MHz distance records were made.

I had an idea a few days before hand that the conditions could be OK across the Great Australian Bight. I was checking the 4 day weather map forecast and Hepburn Tropo Ducting forecasts. Things were actually looking very hopeful and I was getting quite nervous about the possibilities.

The afternoon before there was a cold front and low pressure trough that was threatening all chances of any tropo here. Luckily the trough moved through during the night and was not very disturbing with only 0.2 mm rain.

Wind moved to the SW and Barometer started rising during the night. You can see that the cloud and MSLP map is quite similar to the '03 Boxing day duct. (Boxing Day page) 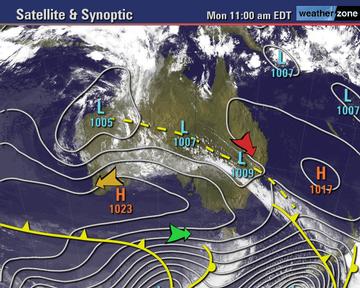 The associated Hepburn Tropo charts are displayed below. Note that the duct extended well into the Indian Ocean!

Not long after hearing the Adelaide beacon, I decided to have a listen for anything out further west across the Bight.

Knowing that the VK6 south coast 2m beacons were faulty I checked just incase, but nothing was heard. I then checked to see if by chance I could hear the Albany (Mt Barker) 70cm beacon on 432.564 MHz at 2682 Km. To my surprise it was most certainly there! Audible at times and up to 5/3 signal. I called and called on 144.100 and 432.100 to no avail. I also made phone calls to no avail. No one was awake in VK6. I was so frustrated. Any contact into VK6 on 70cm for me would break the existing VK2 70cm record. You can imagine how I felt hearing a very weak beacon transmitter and no one to make a contact with. Below is a screen capture of the Albany 70cm beacon at 9.46am, looking quite strong at 2682 Km. 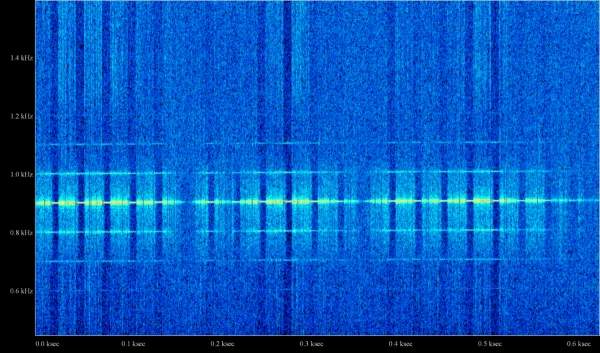 From about 8am, I noted that I could get the Mt Saddleback, Boddington repeater again, VK6RMS on 147.250. It was very weak in behind the Mt Macedon repeater. Distance to Boddington is 2817 Km. The repeater was probably too weak for a contact though I could trigger it at times. It was mainly about S1 signal strength, at times peaking S3. Boddington has a very distinctive ID and tail and its very easy to pick out. Luckily only 2 repeaters on that freq in the whole south of the country. Boddington possibly had a interference problem and was constantly being keyed up by something every 30 sec or so. This became helpful to watch the signal strength. The signal lasted to something like 10.30 am my time.

It was very interesting to see that signals from Adelaide were not all that strong.

Still becoming extremely frustrated, it wasn't till around 11am that miracles began to occur.....

Being pretty annoyed that there were no VK6's awake (3hrs time difference) to make use of the very rare conditions, I suddenly heard Wayne VK6JR calling CQ on 50.110 with a reasonable signal here to my 1/2 wave dipole.  Because it was a VK6 I called back straight away and we QSYd to 50.170 MHz. Wayne picked up to 5/7 on my rig, which is very strong. Not knowing much about 50 MHz ducting, I pressumed it was double hop Es. But with signals like they were and the time of the morning, I was wrong! It was Tropo!!

Down on 144.080 I called for VK6JR and he came back! Waynes signal was 5/2 here. Wayne gave me a 5/5. We swapped grid square locators and I got Waynes QTH of Dunsborough. It was just like a big shock to the system! I was working VK6JR in Dunsborough on 144 MHz! It was like a dream running in slow motion, yet it all happened so fast! There was VK6JR on a 2933 Km path! This beats existing VK2 and VK6 144 MHz WIA records.

Wayne advised he was going to go up the hill and call me on 70cm. So I waited on 144.100. Meanwhile there was sporadic E running north south on the east coast, so most people were not beaming west. 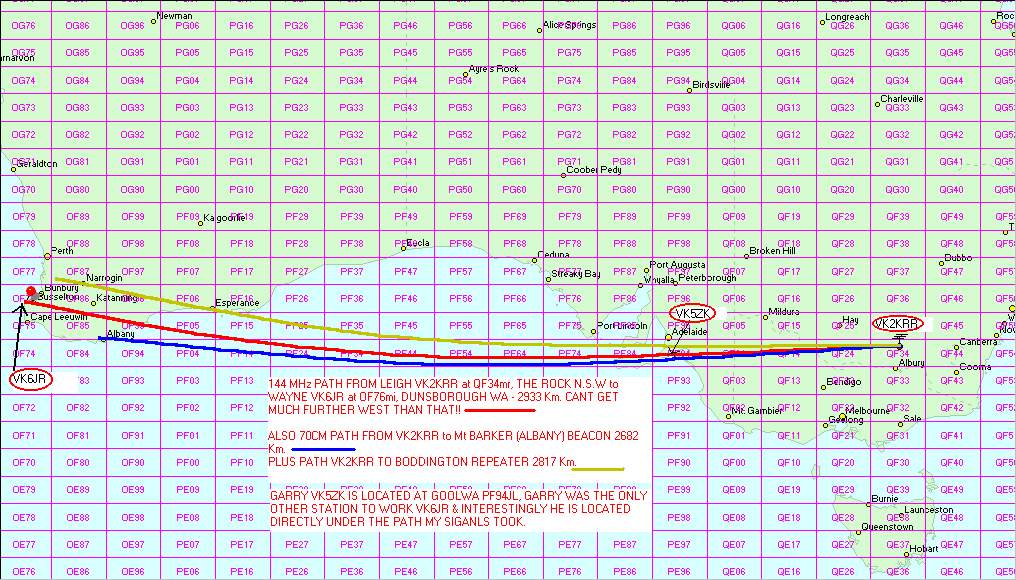 Wayne then went back to 144.080 and mentioned he could hear another station, this was Garry VK5ZK at Goolwa. The two made the contact OK at a bit over 2000 Km. This was the only other contact that Wayne made.

I have checked the ducting graphs and found a good duct at Albany, Adelaide and Esperance.

No duct at Perth, shows only super refraction. Which tends to indicate why no signals were heard from Perth beacons. While Boddington is further south from Perth with only a very weak signal, probably as its closer to the main area of ducting, but still a bit far north.

So there you go. History in the making.